Maps are the visual unification of our world. They hold everything together; allow travel, communication, a physical and psychological unity. Without them society would fragment, globalisation would collapse and I wouldn’t even be able to find my way to my mums house for Sunday dinner. Maps, however, are also a semiological system; the signifier and signified do not have a natural relationship, but a constructed one. And the process of construction can never be objective, meaning maps take on the function of representing and reinforcing the ideology of their creator.

A major theme in the work of Michel Foucault is the relationship between power and knowledge; power is constituted through knowledge and ‘truth’, which are constructed by discourse. The map is a part of a discourse; a knowledge-system which empowers and promotes a particular ‘truth’. Although the map is often viewed as presenting a neutral reality, innocent of ideology and creation, it is actually a production of knowledge, inextricably bound up in the process of power and sustaining systems of domination.

Maps reflect the ideology and priorities of their creator; they are a form of knowledge that reinforces the power that created it. Medieval maps, for example, prominently feature heaven and hell, with demons waiting for travellers who stray off the edges of the (flat) earth. This reinforces the power of the church, – and therefore the state headed by a divinely appointed monarch – by disseminating a knowledge that supports church teachings, emphasising the omnipresent threat of hell to keep citizens in line and prevent them from straying. Whilst our scientific understanding of the globe has improved somewhat since the medieval era, maps are still reflective of the dominant power: the west. 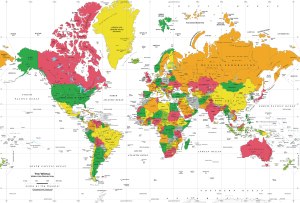 The Mercator Map (pictured, above) is the traditional map adorning classroom walls worldwide. This map, created in 1569 by a Cartographer called Gerhardus Mercator, was designed for sea navigation – naval trade was crucial to European economies at the time. The clumsy and cumbersome globe could be printed onto two-dimensional paper with straight lines representing compass bearings. This map, however, radically distorts the sizes of countries. North America is shown to be bigger than Africa, whereas, in reality, you could fit the United States, China, India, the entirety of Eastern Europe, Italy, Germany, France, Spain, Switzerland and Japan into Africa with room to spare. Africa is vast (see picture, below) The size of a country has subtle implications on how we view it upon the world stage; this map, created and used by western colonial powers, shows the continent they plunder from as subtly less significant. In addition, the arbitrary choice to place North at the top of the map and South at the bottom has a similar effect. The western, wealthy countries dominate the top half of the map, innocuously changing our perception of the southern hemisphere. Deeply embedded notions of hierarchy based on a binary of top/bottom are present in much of our language – top dog, bottom feeder, bottom of the pile, on top of the world – and the world certainly looks dramatically different when flipped on its head.

So what about maps in the digital age? The ever-expanding power of the internet and its capacity for crowd sourcing information has lead some to suggest we are entering an age of the democratisation of maps: Google maps is now the most prolific map, combining a huge number of sources such as digital geographical data, satellite images, traditional maps, street car cameras and local citizens data. These maps are more homogeneous and accurate than ever before, and the advance of technology is leading to a future where cars are equipped with mapping and tracking cameras and maps can be automatically updated every millisecond. However this democratisation is an illusion, the modern map, perhaps more than ever, serves to sustain relations of domination. It privileges and legitimises certain meaning systems – for example, corporate capitalism and industry: the location of the nearest Starbucks is tracked to the meter but information about gradients in the land, the nearest fresh water source or soil types are absent. Roads are already meticulously reproduced, and will be even more so if cars can be fitted with mapping devices, but footpaths are patchy at best. Poorer and rural areas will not benefit from mapping focused on roads or knowing the locations of expensive coffee shops; the world’s most prolific map only provides information for the western consumer. Cartography used to survey the land, now it surveys corporations. Further to this, the modern map effaces the privileging of capitalist consumerism that is occurring. The online map makes the greatest claim for accurate representation, through the use of aerial photos, crowd sourced information and a wealth of links to external websites. This elision of the ideology at work within the map makes that ideology ever more effective. In the terms of Roland Barthes, the discursive mode ‘naturalises’ and ‘universalises’ the phenomenon represented so it appears to be described rather than constructed.

It is impossible to create a neutral map; Jorge Louis Borges’ short story ‘On the Exactitude of Science’ illustrates how ridiculous this notion is by describing a fictional empire that attempts to create a perfect map, slowly papering over the entire world in the process. However, we can recognise the ideology inherent in cartography, thus neutralising its naturalising effects.  And if you want a map that reinforces your very own systems of domination, why not try drawing one yourself?